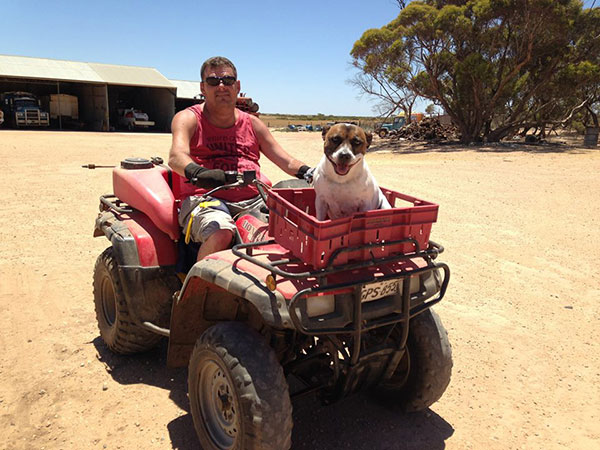 Hi, my name is Vaughan Bedford I am an incomplete C456 quadriplegic of 7.5 years.

I grew up on a large wheat, sheep and cattle property in South Australia until I turned 18 when I started work in the mines, then later in construction as a rigger all over Australia and eventually brought my family to live here to Brisbane. Being quite the adrenalin junkie, racing dirt bikes all my life working as a tower crane rigger was the perfect job for me.

Throughout my life, I made it over some hurdles that stop most people and each one just made me a stronger person mentally. However, on that Thursday afternoon on September 2006, I remember laying on the M1 not able to move or feel anything and thinking, shit I should be in a world of pain, this hurdle is going to be tough.

A few weeks later after coming off the morphine and back down to earth at the spinal injuries acute ward in traction, the doctors gave me their diagnoses as a complete C456 quadriplegic and your condition will not get much better than this. I told them I will prove you wrong, I will beat this. So with a positive and stubborn attitude and the dedicated support of so many family, friends, nurses and WorkCover I set about achieving that goal. Every week there was a small improvement with a little more movement and feeling, so after seven and a half months in the unit I pushed for my discharge, it felt like I had been there for a lifetime. Once home I continued to chase that goal even harder. After 4 years of hard-dedicated rehab hydrotherapy in the beginning then Walk On at the sporting wheelies gym for 12 months, with the help of some very dedicated personal carers, I did achieve my goal to a certain extent, but achieved so much more along the way. I may not have got over that hurdle and actually beat this spinal injury, I still lived with it every day, and some days it tests me, but that is life though, I have learnt to adapt and over come any hurdles my injury throws at me one at a time.

Ever since I left the unit, it has been my passion to help show others you can live a fulfilling life after a spinal injury if you have the right attitude. Think outside the box, adapt and overcome, there is no can’t, just different.