I was admitted to the Spinal Injuries Unit of the PA Hospital after 4 weeks in ICU. 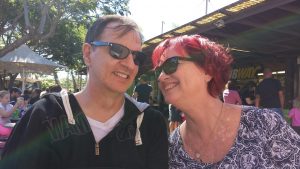 The adjustment to the Spinal Unit after ICU was already very difficult and once my rehabilitation started it opened up quite a terrifying world for me. While I was in ICU my wife had to stay in a university dorm which was both uncomfortable and expensive but was the only place close enough to the hospital and still expensive, even though it was the cheapest available at just over $600 per week, Once I was transferred to the PA hospital my wife was able to stay with family close to the hospital. If it were not for that she would not have been able to be with me during my rehabilitation. Her encouragement and just being there during my physiotherapy and occupational therapy sessions did wonders for my motivation and emotional support. How other patients whose loved ones could only visit them occasionally coped with the emotional demands of a spinal injury is beyond me. I saw many other patients suffer depression caused by the separation of them from their families and loved ones that I was fortunate enough to avoid because my wife was close all the time.

When I was strong enough to go out for weekends, I had nowhere to go that was wheelchair accessible. My wife and I spent one night in a wheelchair accessible hotel room close to the hospital. It was, however, not comfortable and not as accessible as advertised. I had to return to the hospital early in order to be able to shower and toilet. When I was discharged and we moved into a wheelchair accessible unit we still experienced a lot of issues that we were not prepared for. It was not easy to adjust to an environment where suddenly I had only 2 hours care per day and my wife had to do a lot of tasks that we were used to having done by hospital staff during the seven months I was in hospital.

When you spend such a long time in a ward, adjusting to normal living is very difficult and much harder than we anticipated. It took an emotional and psychology toll for the first few month until we got used to life outside the ward and found ways to deal with difficulties not experienced on the ward.

Lourens Botha is a registered psychotherapist, counsellor and registered with the Psychology Board of Australia. He is passionate about supporting other people with SCI and in addition to his counselling work he also facilitates Spinal Home Help’s SCI Connect Group and our Hydrotherapy Program on the Gold Coast.