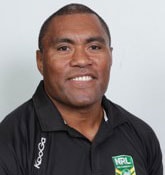 Petero Civoniceva began his NRL career as a centre with the Brisbane Broncos, winning Rookie of the Year award in 1998 and playing from the bench in the Grand Final of the same year which the Broncos won. He missed the Broncos win in the 2000 NRL Grant Final due to injury, but travelled to England to play against the Super League V Champions, St Helens RLFC, for the 2001 World Cup challenge. 2001 also saw Civoniceva’s debut both internationally and in State of Origin, and he went on both the 2001 and 2003 Kangaroo Tours of Great Britain and France. He won the Broncos Player of the Year in 2004 and was selected to compete in the Rugby League Tri-Nations Tournament the same year for the Australian side that subsequently won. Civoniceva won player of the year again in 2006 and played in the Broncos’ Grand Final victory. He has played for the Australian National team in the 2007 ANZAC Test match against New Zealand, was announced as one of the Brisbane Broncos’ 20 best players of all time, and ended his contract with that club in 2007.

Civoniceva signed on to play with the Penrith Panthers in 2008 for four years, and was announced team captain and also named for the Australian Rugby League World Cup team in the same year. Civoniceva played for Australia in the 2010 ANZAC test, but missed out on the Panthers’ NRL Grand Final game due to suspension.

Civoniceva returned to play for the Broncos in 2011 for one year, and was selected to play for QLD the following year– the 3rd and deciding match of the 2012 State of Origin, which sealed an unprecedented seventh consecutive series for Queensland, was to be his last. He has played several honorary games and test matches, and since retirement has focused his energies on giving back to the community. We are pleased to announce that as part of his advocacy work, Petero Civoniceva has joined Spinal Home Help as Ambassador for our Peer Mentoring team, and we look forward to working with him for the benefit of Queenslanders and their families who are living with spinal injury.